October 26, 2008
Yesterday went to Low Yat to buy my cousin a sub RM 1500 notebook. Of course with that kind of price tag it would have to be a netbook jelah. Anyhow, I was short on time so I didn't get to browse thoroughly. Just went for one quick round around level 2 and picked the one that I thought would fulfil his need. The thing is, as soon as I stepped out of the lift there was a shop that sold the new Dell Inspiron Mini 9 for only RM 1199. I was suprised. Just 1199. I couldn't believe my eyes. With original Windows XP and all. RM 1199. I thought there must be something wrong. Better survey first. So went around level 2. There was nothing that could match that price. Most of the other netbook from acer, asus and lenovo even was around RM 1600. So I decided I'll just go with the Dell lah. But to tell you the truth if I had money to buy for my own use, I'd go with the Lenovo Ideapad S10.

Fuh.. she's one sweet mama... Smooth rounded curves, slim white profile. Pergh.. But anyway, that was RM 1699 which is more than the budget so I went with the Dell. 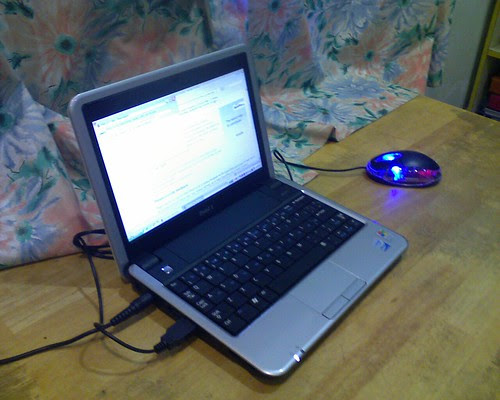 The Dell has a keyboard with decent sized keys. I was actually able to touch type on it. But to achieve that there wasn't any dedicated function keys. So I don't think this would have been a good choice if say you wanted to give this to a blind person who uses the shortcuts a lot as he would not be able to find where the function keys are. And also there was some of the keys that moved from their normal place. The most obvious was the apostrophe which brought me to a screeching halt when I had to type it as it was not on the homerow as usual but on a tiny little key at the very bottom row. 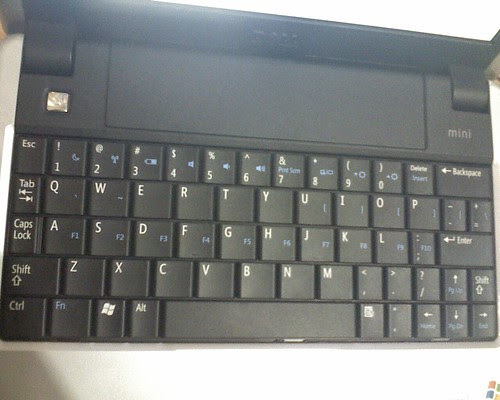 As for the size of the netbook itself it is as small as most other netbook out there. It is small even when compared to my cute little face. :P 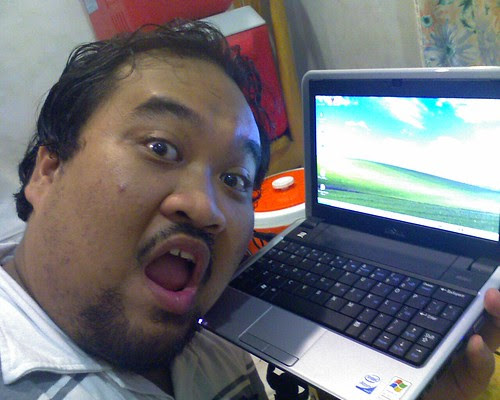 Of course running Windoze XP it took a lot longer than my wife's asus which can be cold booted and used within 30 seconds. I didn't time it properly but felt close to 2 minutes before if became fully usable. As it came with a barebone Windows XP so as soon as I got home of course I downloaded firefox and OpenOffice.org. :D Not sure whether chrome might have been a better choice but firefox is good enough for me.

abdza said…
I would recommend the mini 9 for the fact the keyboard is just more comfortable. But if you do not touch type, then eee pc with linux boots very fast and usable in most situations. But typing comfortably is important for me so I'd say mini 9.

abdza said…
Well, if you haven't got streamyx already or have a need to be online anywhere then it sounds quite ok. 24 month is quite a long time though.. And also better check whether your area can actually get full 3G because here in Serdang, Selangor the performance of maxis 3G is not so great. But in Taman Melawati it is quite good.. :D

p/s: that was from personal experience around a year ago. It might have gotten better now.

Call me A.S for AkiraSabine said…
Hi there,

I'm also deliberating on buying either the Mini 9 or the Lenovo S10. Is the Mini 9 much lighter in weight considering that it uses SSD instead of the HDD in Lenovo?

Lenovo is my choice this far but I'll check the Mini 9 out in Low Yat someday around. Apparently, dealers I check with in PJ have run out of stock. Btw, does the Mini 9 comes with the Windows recovery software CD? How much storage space have you got after installing the open source office and Firefox?

abdza said…
@akira: yes it comes with a windows recovery cd and also driver cd. After the bare windows installation there was around 3 GB left. Installing OpenOffice and Firefox doesn't take up all that much space.. ;)
November 10, 2008 at 10:08 AM

chenboontai said…
Hi Brothur, please help on three questions. 1. Does your mini 9 has a slot for HSDPA SIM card? Because I am using celcom wireless broadband now thru huawei USB dongle 2. can it really work with celcom broadband or maxis wireless broadband? 3. If it really can work, I will buy the mini 9 and throw away mu huawei usb dongle

I went to Low Yat today and some guys told me the slot in mini 9 may not be able to work with celcom and maxis wireless broadband coz the importer has disabled the built-in modem or the modem is totally absent and empty.

Anonymous said…
im posting this comment using my maxis mini9 that i bought at the recent lkcc pcfair for rm2136.damn.

the important thing b4 u buy ur own maxis mini9 is THINK AGAIN.

my reason: i want to own an ultra-cost-pc since 2006 (after watching my brunei-based friend using it n she look so damn cool) and i want to avoid acer one & Lenovo cs i really love dell.i'm a fan of dell.

after a 3 days doing homework and accidently it was the pcfair week, i was force to accept the maxis thing.

DELL ALREADY SOLD THE MINI9 TO MAXIS.as they alredy did to the Vodaphone in the west.so u cannot buy mini9 without the maxis broadband.

Luckly, i get 2 bar for the utms/hspa broadband thing in my house somewhere at the border of shah alam n klang. full reception of maxis broadband in my workplace, that is in jalan kebun.lucky.

my word: just go for the AcerOne with 160G & 6 cell batteries if u live far from the city civilisation.cs i'm stuck with my mini9.n i can see made in china sticker everywhere at my mini9.so does my friend's hp netbook.also made in china.huh.

chenboontai said…
Hi Rozanna Jecqo and En Abdullah, I already have a Huawei USB dongle for my Celcom wireless broadband. I was happy when Maxis announced tie-up for Dell Inspiron Mini 9 with an built-in HSPDA Modem, thinking I can just buy the Dell Mini 9 without having to sign up with Maxis.

En Dollah, does the Dell Mini 9 you bought at Low Yat for RM1199 has a BUILT-IN HSDPA MODEM?

Honestly I am NOT a techkie, I am just a consumer who dislike the dongle hanging around my Notebook PC, so does any of you know of any other brand of NETBOOK or NOTEBOOK PC that have BUILT-IN HSDPA MODEM?

Thank you for your help.

so far mini9 is the only netbook with built in hspa modem (maxis claim it can support up to 7.0M bt currently malaysia only provide 3.6M, funny)

u can wait for the viao-p that looks good in red bt i'm sure it will cost more than rm2k n with the built in modem.

all other brands, from my survey in last 4 weeks, does not offer u the internal modem like mini9.

u can goto mydellmini.com for more info n forum.

btw, they already annouce the coming of dell mini10, complete with

actually, i enjoy my mini9 as it is realy PORTABLE and small. n the adapter, mouse, external hardisk can fit into my new red golla 10 inch bag.

pak wan said…
hi.. so sorry if my Q sound stupid.. I'm not a techie and really intersted to buy a mini .. just want to know does the performance is acceptable should i would want to use it with the excel / powerpoint / words (doing my master, but i don;t want to lug notebook around)? or is it just good with blogging / facebook etc
February 8, 2009 at 4:48 PM

abdza said…
@ojah: I don't see a problem using the dell mini as a complete replacement for office work. My mom uses OpenOffice in Ubuntu on it and she doesn't have any problems at all. Only she doesn't multitask all that much (she doesn't listen to MP3 or anything while working) so that might be a factor. But I don't think it would pose a problem since I've tried opening multiple tabs of youtube.com on it and it still runs quite smoothly. Only thing is, remember to always back up your work. Save it in the hard disk, save it in a pen drive, send it in an email or anything as long as you always have duplicates of it (/me had friends having bad experiences with their thesis on their computers)
February 9, 2009 at 9:23 AM

Anonymous said…
hie.. sorry to bother.. but i'm a little confused. i thought the dell mini 9 only comes with the maxis broadband package?

abdza said…
@anon: oh it can be bought straight from some of the shops at lowyat. No need for maxis or anything. Last time I checked you can't even get it online at the dell website. It's only sold through certain dealers.
February 13, 2009 at 11:58 PM

rizal said…
hello,
bought one Dell mini 9 at House Of Notebooks in MidValley for RM899. Paid additional RM150 to upgrade to 2GB RAM (but still with the same 8GB SSD. I'm going to persuade Maxis to lower down their offer price ;) and I need a lot of help on this matter.
June 22, 2009 at 12:07 AM